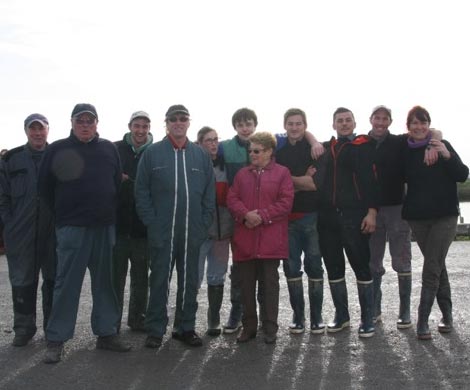 The Grandfather of Gaby henri Baudit was a fisherman in the Pertuis Charentais.
At about 1850, a coaster loaded with a boatload of oysters from Portugal, had to be sheltered in the Gironde estuary. During the bad weather, the captain of the ship ordered the crew to pass over the oysters overboard.
The adventure of the oyster began in the Pertuis Charentais. All the oysters were not dead and they reproduced very quickly.

Etienne (the Grandfather), immediately felt the opportunity to change his craft for the culture of the oyster, which he made quickly.
In 1896, his son René continued in the profession and developed the exploitation. Gaby henri took over the torch and built the buildings adapted to the modern oyster.

His two sons, Patrick and Joel, enlarged the farm by buying parks in North Brittany, while preserving the maturing and marketing in the Marennes Oléron Basin, at the Tremblade more precisely.

Five rear small children entered the holding which ensure its durability.
And from that day on, we are at the fifth generation of oyster.